My Rocket Bike
( That Daring Young Man on His Frying Machine )

As I recollect, the following events occurred during my junior year in high school.   At this time in a young man’s life there are two overriding subjects that occupy his thoughts – namely, cars and girls (not necessarily in that order).  These two subjects are by no means mutually exclusive…in fact, the need for one is motivated by the desire for the other.

At this crucial time of my life I had insufficient funding to support a car and its necessary insurance / upkeep expenses.  I had to get some form of transportation and it was about this time that one of my friends at school decided to sell his Monarch Super Twin (a regular bicycle with a gasoline engine affixed).  This was certainly not a car, but it beat having to walk everywhere.  Not by much however.  This particular machine had a characteristic wing-ding-ding sound it made as it went down the street much to the endless delight of my peers at work and at school. 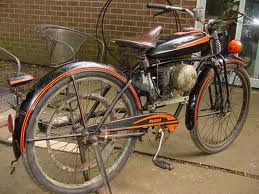 As time went by I came to detest that infernal machine.  It was a constant source of humiliation and embarrassment.  No small part of this discomfort came from what I felt to be a major design flaw. The Monarch’s exhaust manifold, muffler and tailpipe would expand when it became hot and would fall off at the most importune times.  Many times I would be riding innocently along when all of a sudden the white-hot exhaust system would cut loose and drop on my left calf yielding yet another smoldering brand on my leg cooking through the flesh until I could bring the bike to a safe stop.  The normal high-pitched “wing-ding-ding” became an ear-shattering “BLA-DAA-DAA” which would call attention to my plight to anyone within hearing distance.  Shaking it loose from my melted trousers and stopping the bike at the same time gracefully was a skill I never quite mastered – even after many painful episodes.

It is at this point that my friend Fo enters the picture.   He had two things that I had not – a girl and a car! I readily admit that I spent an inordinate amount of time observing Fo in hopes of my gaining a modicum of his exuded “cool”.   I blush to confess that I tried to copy (often unsuccessfully) his style and demeanor.

One day just before lunch at school, Fo came up and told me to meet him at his car in the school parking lot.  When I got to his car, he was already seated in it waiting for me.  I must digress at this point to explain that his car was backed up and parked next to the brick wall of the school.  Fo started the engine and revved it up several times.  He then said, “Take a look out the back window” as he flipped a switch he had mounted on the dashboard.   I have never seen such a spectacular sight in my life!  All I could see through the window was a solid wall of bright orange flames.  Once he turned the engine off, he explained that he had drilled a hole in the end of the exhaust pipe, inserted a spark plug and ran it to a spark coil that was operated by the switch.  What a wondrous thing he had accomplished!  Never mind the fact that he had actually burned the bricks of the school black in that spot.  It can truly be said that Fo left his mark on our high school.

Of course we had to try this marvelous thing out at night to get the full effect.    We drove downtown and were stopped at a traffic light when a city bus came up behind us.  “Watch the driver’s face” said Fo as he gunned the engine and hit the switch.  Looking through the rear window, I could see the drivers face turn to a look of horror in the bright orange glow of the flames as the light turned green and off we sped into the night.  I was enchanted and, of course, I couldn’t wait to make a similar modification to my Monarch Super Twin.

I just knew that my stock with my friends (to say nothing of girls) would go up several notches once they saw my motorbike burst forth with four or five feet of flame shooting out the exhaust.  I carefully drilled a hole in the exhaust that would accommodate the screwing in of a spark plug.  I then ran an ignition wire from the plug to a cable strap near the magneto.  I decided to go with this arrangement (rather than the spark-coil/switch set-up Fo used) because at the moment I had neither a spark-coil nor a switch to test the concept on my bike.   I figured I could simply put the end of the wire near the magneto and given enough unburned gas coming out the exhaust, I should be able to develop at least a small flame.  Upon completion of the initial installation, I decided to take the bike out for a trial-run.  About a block away from the house, I spotted several girls walking down the sidewalk in my direction.  This seemed the perfect opportunity for getting an unsolicited reaction to my new rocket-driven machine.  I revved the engine several times to build up enough raw fuel in the exhaust …. “Wing-ding-ding-ding”…..”WING-DING-DING-DING”….. At this point I reached down with one hand just as I was driving by them, grabbed the ignition wire and touched it to the magneto.  “ZHHHT … BRRRPH” …”VVVVT” three huge jolts of electricity shot through my entire body.  I believe the sparks came out of my eyeballs!  It was at this moment the heated exhaust fell off onto my leg …”BLA-DAA-DAA” the now muffler less engine blasted.  I lost control of just about everything as the bike swerved, wobbled and then self-destructed in a heap at the curb next to the girls.  Derisive laughter was the reaction I had neither sought nor desired.  After the pain in my leg subsided and the exhaust pipe cooled enough to touch, I picked up the various pieces of my bike strewn around and headed for home.

... I sold the Monarch shortly after this !